Access Case Study: Nikki Charlesworth and What Happened to You?

An interview on how to integrate access into performances

What Happened to You? follows three raggedy puppets, who like their puppeteers, are just trying to get through the day. Ahead of them lies a mountain of challenges; they are forced to find creative ways to overcome their impassable surroundings.

In a playful and humorous way, this performance explores people’s preconceptions about disability. Aimed at a young audience, this is one for all the family.

Alex Covell, Access Advisor at Without Walls, spoke with theatremaker Nikki Charlesworth about her experience creating the show.

How did you consider accessibility when creating your show?

We wanted access to be at the forefront of the show’s aesthetic. In addition to the embedded Audio Description (AD) and British Sign Language (BSL) interpretation, we created the following resources to run parallel to the performance: Easy Read Guide/ Visual Story, Sensory Packs, Pre-recorded Audio and BSL flyers.

The show featured pre-recorded AD, which was embedded into the music by the sound designer. It was played aloud for all audiences.

The show included artistically integrated BSL. Mia Ward (actress and translator) joined us for the final three days of rehearsals (having pre-learnt the script) to find character and fully integrate her into the final staging.

Becky Barry was a creative consultant that we brought onboard in rehearsal. Becky assisted Mia with ideas and collaborated on how best to integrate signed language into the story telling. They experimented with role shifting, other characters using BSL and finding the poetry in the movement.

You had a few Access To Work applications to ensure equal access to the rehearsal process and performance work. How did you find this process?

We applied for Access To Work for Mia and myself (Nikki).  Access To Work applications were sent off eight weeks in advance of the project starting. The Government website suggests six weeks minimum; however, there was still a delay beyond this. This could have been due to the impacts of Covid or the furlough scheme. Sophia, our producer was invaluable in supporting us with the implications of this delay.

We had paid for five days of expenses in advance of receiving the Access to Work support.

We spoke with a Case Manager and for travel support and hotel support, we would have needed to book it at the same time as writing the form. There are caps for overnight stays (London £130 per night and Kent £80). After a call with the Case Manager, this was all approved in the end. The expenses were difficult to pay for, especially if travel dates were changed. I spent a lot of time on hold, and was very grateful for my producer to support this process. It is worth applying as we received most of the funding. In particular, the BSL interpreter fees were accepted and easy. 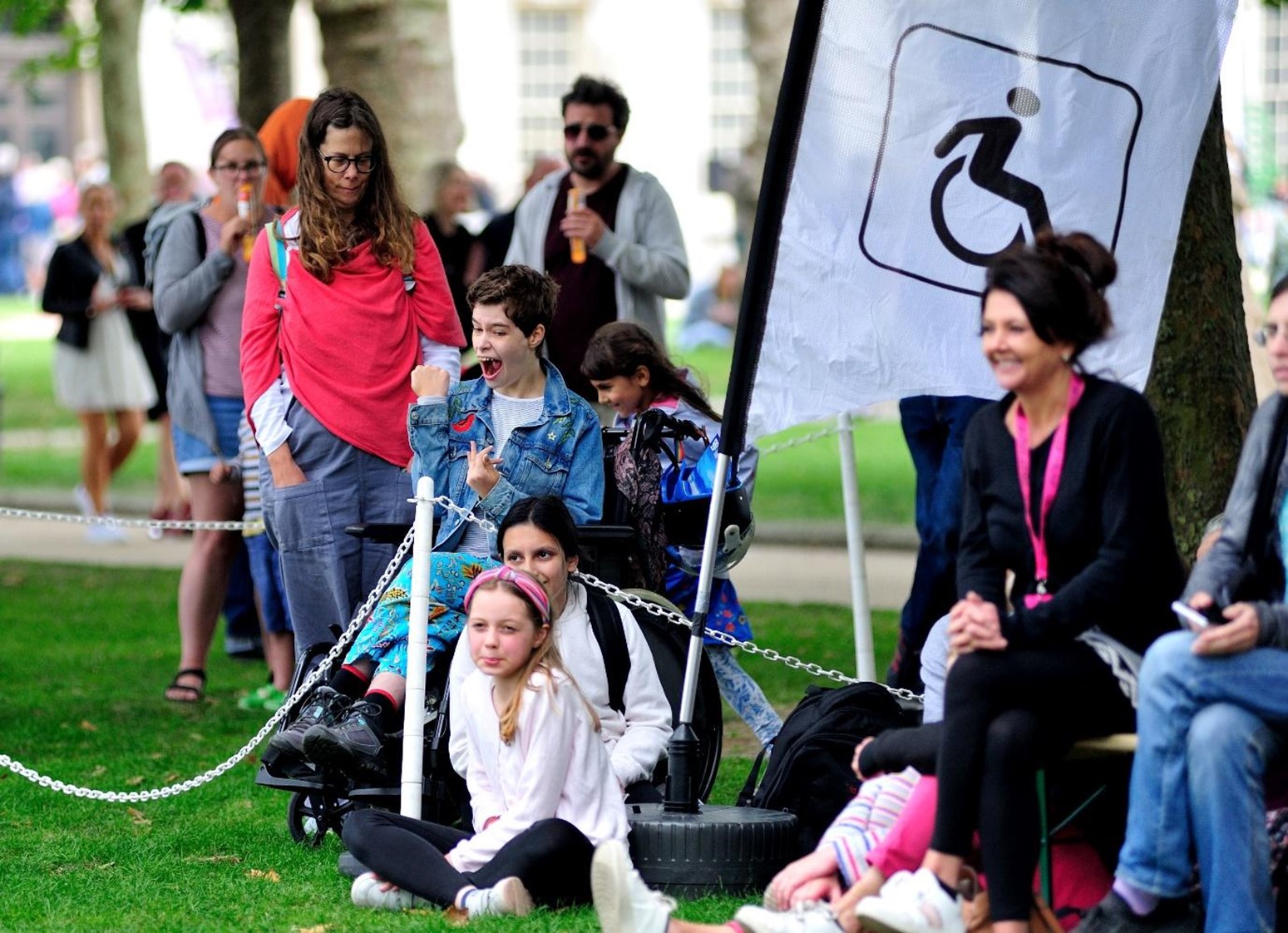 What Happened To You? had really beautiful and successful integrated British Sign Language. Tell us about how this worked.

We knew we wanted to integrate BSL within the performance, in particular a Deaf performer.

In our Call Out, we included how we would support artists to make applications to Access To Work if required and that we wanted a representative cast. We also asked for access requirements for the interview. Applicants were able to submit via covering letter, short video, or voice recording. Becky Barry recommended Mia Ward, who is also a Children’s TV presenter with BSL Zone.

We had 10 days devising and rehearsing. Seven days were with the main cast and on the final day we recorded a film of our piece. I added subtitles and notes to the video. I sent this plus the script with time codes to Mia to start learning the script and translate.

On Alex’s guidance, we put a short break between this R&D period and our final rehearsals to create the Visual Story template, audio description recordings and for BSL translation.

We then had final three days of rehearsals with Mia and Becky, plus the audio descriptions.

“Integrating sign language gave a new perspective on the characters”

We worked hard to ensure the script was set in the R&D process, as it was important to keep to the script and not improvise too much when on stage so that Mia could learn the BSL translation in advance. Within our cast, it was useful that I had BSL Level 2 which enabled me to communicate changes. Towards the end of the run, when we had more experience with the show, it became easier to communicate any changes.

It was fun to integrate sign language; it also gave a new perspective on the characters. For example our character, ‘Busy Body’ it was fun to see how that character was presented in visual language.

It is useful to think about understudies for this role, one day Mia had to isolate because of Covid, and we were able to fill her role with an interpreter who had seen the play. It was also useful to have a filmed performance so an understudy could learn the script.  For the future, it would be useful to have more people who could sign in the cast.

This show integrated live and pre-recorded Audio Description. Describe this process for us.

We hired Jane Ensell, a local Audio Describer to work with us on the show. We also worked with Chloe Clark who is a Blind Children’s Theatre maker as an audio description consultant. She provided very honest feedback.

Our sound designer/composer, Oliver Vibrans, firstly composed the music (during the break between rehearsals) and then joined us in the final few days of rehearsals to embed the audio description. Oliver was very ambitious in his role and it ended up taking longer than expected. The break between rehearsals was incredibly useful to find the right places for the AD to be embedded. Jane and Oliver worked together closely to consider how the sound and atmosphere also supported the AD. This encouraged creative unison across the whole sound design to support the aural communication of the visuals within the piece. We also explored when audio description could be inserted into dialogue to make it more natural, for example:

AD: A lady strides in all beads and big blonde hair.

Little Red: Oh no, not this woman again, she always says the most silly things.

AD: She picks little red up. What are you doing?

Busy Body: I’m picking you up and putting you on the chair.

There were incredible benefits to having Chloe and Jane as part of the process. Chloe supported over Zoom. We were able to make sure everything was accessible as possible for a VIP audience. This included thinking about set and costume, for example when one character, who was yellow, sat on a yellow bean bag, we realised we needed to ensure colour contrast.

Webinar on accessibility in outdoor arts festivals and events