Without Walls TALKS: Public artwork and the changing landscape of 2020, by Yara El-Sherbini

All of our work is rooted in meaning-making, and made in response to site, context and audience. So while COVID-19 changed our original plans for Arrivals + Departures, Davina and I were able to do what we do best; reflect on the time, the situation and how we could adapt our work to be even more meaningful for the public.

Arrivals + Departures are two large analogue arrivals and departures boards, however instead of announcing planes or trains, the public is invited to announce births and deaths. Like all of our social practice artwork, the device is simple and accessible, while the potential reading is wide and diverse. The artwork has many entry points: it can be a site of mourning to a space to celebrate the joy of birth. It is a public artwork where people can memorialize a lost loved one or celebrate a living person. It becomes a site for deeply personal engagement to one of political activism, inviting the public to activate it, and in doing so, expand how public art can be made by and for the public.

Using a simple website, or via a steward, the public submits names and stories of those born, living, and those who have died. The public artwork was supposed to open in April at Somerset House, to start off their season titled ‘Births, Deaths and Marriages’. Somerset House was historically the registrar offices; the site for registering births, deaths and marriages in London, so the context was ideal. After a 4 week install, the work was set to tour to three Without Walls partner festivals: Brighton, Norfolk & Norwich, and Freedom Festival, alongside Milton Keynes International Festival, throughout 2020. Just two weeks prior to opening, and after one year of tailoring the public programme, everything got cancelled.

"As heartbreaking as this was, it also gave us the time to reflect on how this work could become more urgent and more relevant and how we could adapt the work to make it more poignant."

We had always intended that Arrivals + Departures would open up spaces for discussion and debate on subjects around birth, living, and death. Death was a topic, pre-covid, that was hard to openly discuss. We wanted to open up the language around death and dying to de-stigmatize death and grief and allow us to reflect on living in the now. We had developed a playful ’Death Euphemism Bingo’ to look at the language we use to avoid saying dead and died. But after COVID struck, the fear of dying changed how we spoke about death. Every day numbers of the dead were announced on the news. It was terrifying for some people. The bingo became redundant. During May and over the summer this was coupled with the death of George Floyd and Breonna Taylor which sparked world-wide awareness of the Black Lives Matter movement. The numbers of black people and people of colour that have died through direct police brutality became more urgent. Naming the often unnamed, or those where justice was not served, was always an entry point for the public, we knew we needed to directly highlight racial and social injustice in terms of the act of naming people who have died or been killed.

Over the next few months we began developing a reduced and covid safe public programme. The Arrivals + Departures public programme was not an add on at the end, it was, as we put it, a triptych; the physical boards; elegant and engaging, the online website, that alongside inputting information, gave locations, archives, and resources, and finally, a dynamic public programme that was tailored for each site. The public programme was an accessible, engaging series of events, that spanned Birth and Death Cafes, to choral singing, to discos to naming ceremonies to meditation and a series of dynamic talks. Over the summer we had to respond to new government rules, re-thinking how we could engage with our public. If this work was intended to be for the public, made by the public, we had to continue a public programme but in a new covid safe way.

In late July, we found out the work would open at Somerset House in early September and we had 6 weeks to get our new thinking into place. We hosted the first-ever Birth Cafe, a death cafe and the opening we invited Sophie Herh…..to create live life drawings, based on conversation and dialogue with the sitter, using memories of the deceased to create drawings. We developed a series of digital takeovers, in which we invited five activists/experts to take over the boards and frame the work. We worked with birth activist Laura Godfrey-Isaacs, environmental activist Suzanne Dhaliwal, Death worker Bilal Nassim, and two racial and social justice activists, Toni Lee and Rima Hamid. Rima created a two-hour durational intervention submitting 104 names of the victims of the 2019 Khartoum Massacre. These interventions and takeovers opened up news spaces to engage with Arrivals + Departures. Rima’s work specifically tapped into our interest in what it means to name people who do not usually get named, and how politically significant this act can be.

"We had already developed a story element to the online engagement, but in the context of lockdown we expanded this element. The stories become more relevant and we were astounded and humbled with the way in which so many people opened up so honestly on this platform. We had heartwarming and heartbreaking stories. "

Some wrote about the often taboo subjects of miscarriages and still-birth, grappling with acknowledging the simultaneous birth and death of a child. Others memorialised people from history in ways which questioned how history is taught. The stories have been archived and we will think in the future about what we do with these.

Davina and I are always finding new ways to tap into the zeitgeist; the current and important issues of our time. A conceptual strand in this artwork that just so happened to become more heightened and urgent was how this work functioned as a public memorial. The naming of everyday people was always at the heart of this project, and how, when people submit names on the boards, the work becomes a public memorial. The choice of who gets named, who gets memorialised, and acknowledged is given to the public. This became more timely because public statues were being pulled down; statues of people that the public did not choose nor want to be venerated were removed. The boards, installed within the grandeur of the courtyards Somerset House solidified this idea of a contemporary public sculpture. We had created a public artwork that invites the public to choose who gets acknowledged. We had inverted the process of selecting who public artworks are about by giving the power to the collective everyday public. This re-thinking about public statues and memorials is one of the ways in which, as I said previously, the work has wide and diverse readings.

With physical restrictions in place, we now worked very closely with the social media team at Somerset House, tapping into their Twitter and Instagram posts to expand engagement. The work was so successful it was extended from 4 weeks to 8. And while in this usual time period there would have been tens of thousands of visitors, in the height of Covid, and limiting rules, we still had over 4000 visitors, over 2100 people submitting names, and 650 stories being submitted.

Installing Arrivals + Departures during Covid, the BLM movement, and within the framework of institutions with limited staff and massive budget cuts was incredibly challenging. But we managed it, and in the changing landscape, the work became much more powerful and relevant.

For more about Yara’s work as one half of YARA+DAVINA visit www.yaraanddavina.com

Arrivals and Departures has been supported through commissioning funds from Artsadmin, Without Walls, Freedom Festival (Hull) and Norfolk & Norwich Festival and with funding from the Create To Connect > Create to Impact network through the Creative Europe programme of the European Union and public funding through Arts Council England.

The development phase of Arrivals + Departure (2018) supported by In Situ Network through the Creative Europe programme of European Union, Without Wall’s Blueprint programme and Seedbed Residency at 101.

All photos are © Somerset House Trust 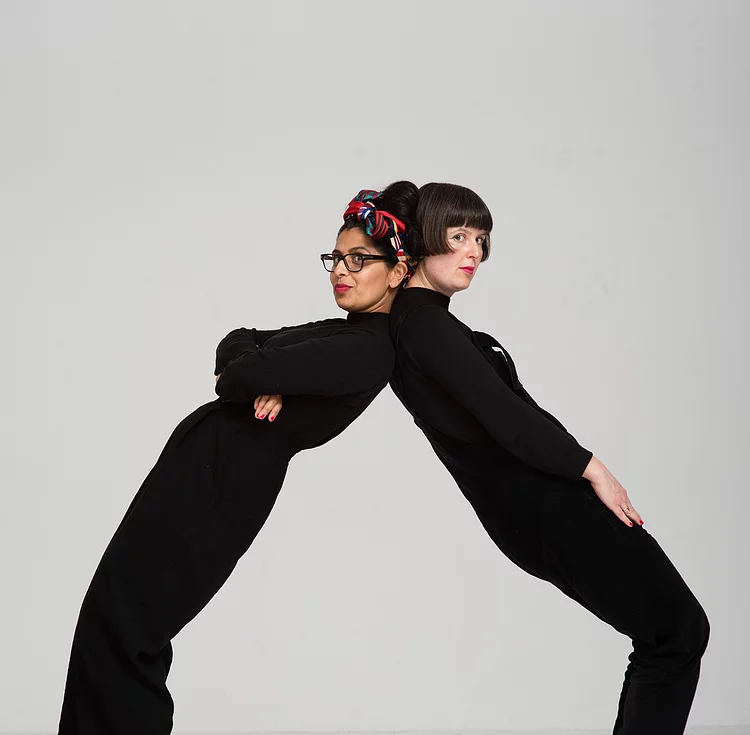 She is one-half of artistic duo YARA+DAVINA, alongside Davina Drummond (pictured right).

Yara and Davina have been making social practice work for two decades, working with many major art institutions around the globe. Since 2015 they have been collaborating, forming the duo YARA + DAVINA. Together they make ambitious and playful public artworks that respond to site, context and audience.

Unfailingly inventive, they use formats from within popular culture to make works which are accessible and playful. Their issue-based work is site-specific and responds to different contexts, from geo-politics to lessons on love, to knowledge production or mental health. Using formats such as jokes to mini-golf and choirs and tattoo parlours, they root their works in the every day, using a lightness of touch and humour to make works that are both poetic and universal.