Orkestra del Sol is one of the UK’s foremost and fastest fanfare street acts – a riotous brass carnival, hiding serious musicianship under tongue in cheek humour.

Without Walls hosted Orkestra del Sol whose brand-new Fanfare show is forging a path for both music and street theatre in the UK.  Inspired by the marching band traditions of Eastern Europe, this is celebratory music, delivered with an unruly charm: the swagger of a Balkan wedding band with the flair of Latin carnival. 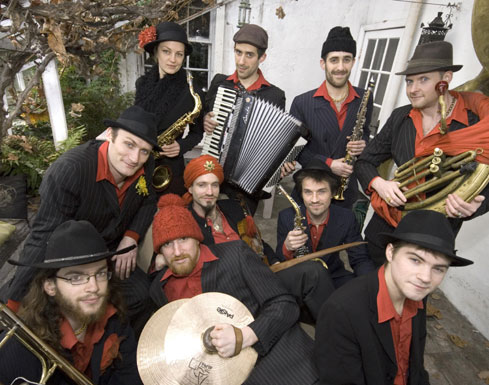 Orkestra del Sol splits its time between performing at street arts events and the music stages of major festivals. Formed in 2004, they have represented the UK in Tarrega, Linz, Czec Republic, Beijing and Delhi. In 2008 they were included in the Without Walls project, and in 2009 appeared at Mouth of the Tyne Festival, Glastonbury, Bestival, Latitude and Belladrum.