Without Walls TALKS is our new series of provocations, thought pieces, and discussions. It provides a platform for those working in the Outdoor Arts sector to share ideas, provoke and learn from each other’s experiences.

People chance upon art outdoors: it is the most accessible and democratic of forums. It gives the arts back to the people. Now more than ever, when interaction is invariably virtual, we need to experience live, physical art that we can move around, see from different perspectives, discuss with strangers, and share our reactions, in the moment.

Live, up close and personal, art has the biggest impact – visceral involvement is key to humanity, to communication, development and change. Trapped inside, during a pandemic, we yearn for human connection. Public space is in the forefront of every interaction.

So, let’s shake things up and invite our friends, our families, to an arts event – let’s encourage outdoor gatherings in considerate and safe public spaces to reinterpret past lives and re-tell history.

It’s in the streets where we encounter different opinions and values. The Black Victorians experience is not about celebration: it is a provocation. Outdoors arts are commonly thought of as celebratory, particularly of black people during Carnival. This project is a more serious one. I want to add a new dimension, expanding my work as a black female artist. I believe there is an appetite for art that challenges, and Black Victorians will attract new audiences.

The incongruity of black people in formal upper-class dress; Victorians in the modern age – these are arresting images. They arouse curiosity, and change how we perceive and are perceived in the world. As a choreographer, my work is more symbolic than literal. The movement I create is designed to make the audience reflect, imagining someone else’s story. I want spectators to empathise with people whose voices are not being heard, to imagine what it felt like to be a Black Victorian.

Making Black Victorians was a political act. Presenting it at the Garrison Chapel in Woolwich affords an opportunity to tell an untold story.  The chapel was bombed during the war and has a beautiful new roof – like my piece, it represents the old and the new.  We place ourselves outside and within historical contexts. I chose a space that holds a secret, hidden history . . . a black history. The chapel was built in Victorian times. Writings on the wall contain dates relating to life in Woolwich, but there is no mention of black people. Both now and in the past, the chapel has been regarded as a ‘white space’. We will re-imagine the space in our own way.

This story is for everyone, not just one section of society. 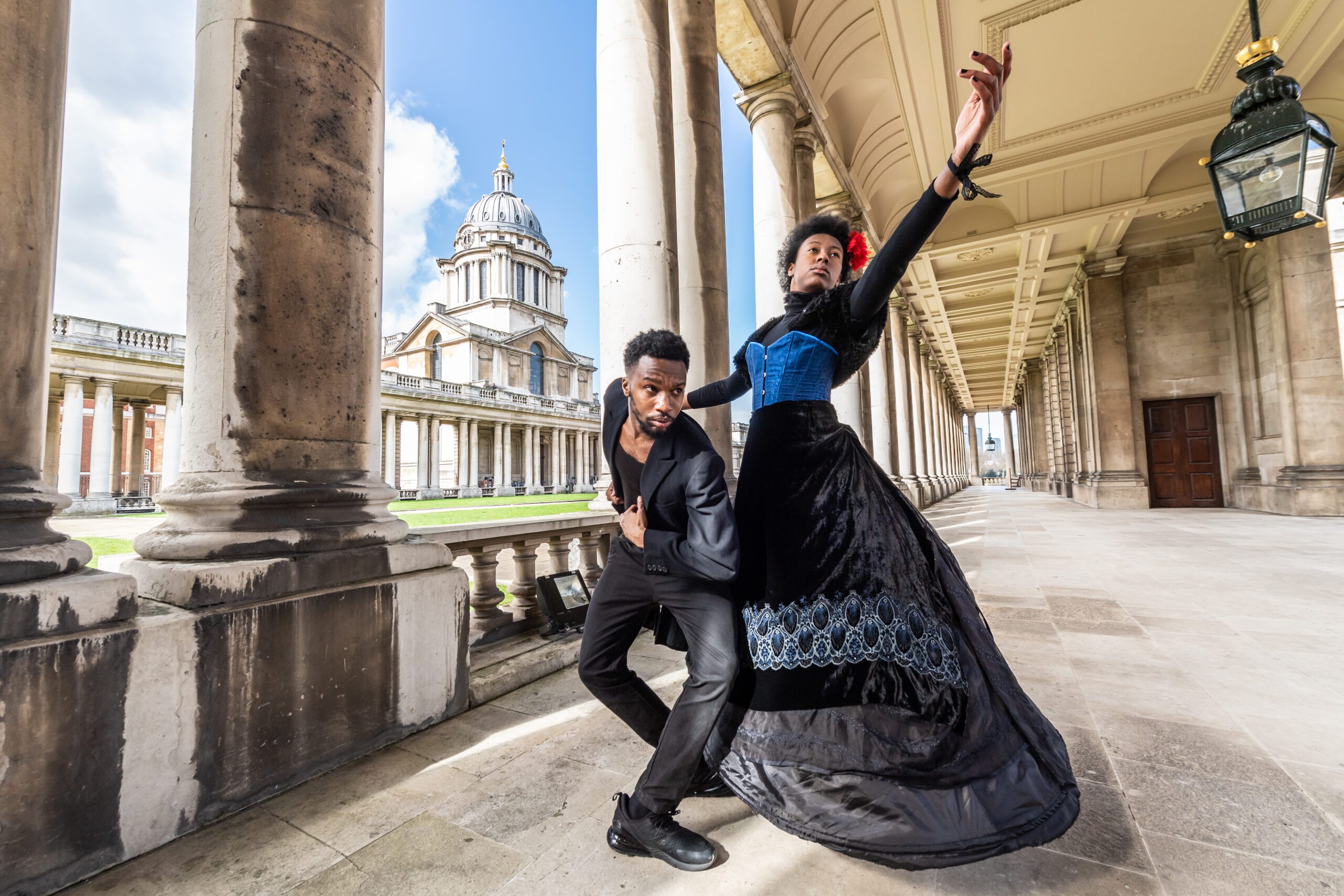 I aim to raise awareness of hidden black British history – and ask who gets to tell it, and how do we encourage different voices to step up and speak out? Are we not entitled to know our own history? It’s also about kick-starting a wider conversation about what is going on now.  Because the official version of history is being challenged; the assumption of hierarchy is being challenged; the times they are a-changing.

I started work on Black Victorians after being inspired by Renee Mussai’s curated show of photographs, evidencing the history of black people in the UK. As a black female artist, it took her years to assemble her curation and she had to jump through many hoops to get it exhibited. These images had been concealed – she worked hard to bring them to light. As I attempt to illuminate these hidden portraits in my work, I too must be demonstrative in order to share our history. I have been allowed to use the images for this show only. To fully realize my vision, I will need to ask the permission of powerful white institutions every step of the way – to retell our history. It may not be granted. I might have to pay. I make no complaints, I’m just describing the challenges I face.

Barack Obama said: ‘We must challenge an infrastructure of oppression, centuries of convention, and countless indignities’.

My biggest practical challenge is how to make it work. I have a beautiful old chapel as the set and backdrop. I can have the audience seated in a way that adheres to social distancing rules. But how will I recreate a piece that in its work-in-progress form was a mixture of duets, solos and group dances? And of course, there can be no body contact. How do I tell that without touch? How can I get the audience to feel what it was like for a black African to be photographed in a studio in Britain, sitting still for hours on end, being dressed up in restrictive, unfamiliar clothing?

To date Black Victorians has undergone two R&D phases. During the latest one, I felt as if I was presenting my child. And now, today this child, who was not even learnt to walk, is being asked to run. It is exciting . . . but scary.

I am preparing with a cast of black dancers, despite the fact that COVID-19 continues to restrict us. We are taking a risk: evidence shows black and Asian people are more susceptible to the virus. I feel vulnerable as I take these steps to presenting my work. But we must find courage to show our art, even if it is deemed inappropriate, offensive or too political. Because in time it will be accepted.

What seems normal now was considered dangerously radical in the recent past: black people had to fight for equality by occupying spaces where we were not welcome, by marching in protest, clashing with police. What has really changed? Black Lives Matters movement repeats past struggles. We struggle for acceptance beyond voting rights and access to education. Perhaps finally we are gaining visibility as artists, opinion formers, and creative leaders.

Black Victorians will be presented at the Greenwich+Docklands International Festival on 29th & 30th August 2020.

The R&D of Black Victorians is supported by Without Walls Blueprint. Initial financial support is given by Historic Royal Palaces R&D Studio for Phase 1 & 2 of the research and development.

Harnessing over 20 years’ experience, Jeanefer Jean Charles is a globally respected Creative Artist and Producer who has worked in over 21 countries, and whose accomplishments appear in the Guinness Book of World Records. Her company, Jeanefer Jean-Charles & Associates, are industry leaders in developing, directing and delivering creative responses for large-scale events and offer ambitious, innovative and empowering responses to client needs.

Jeanefer has designed and delivered artistic solutions for some of the world’s most iconic organisations. Her extensive portfolio includes opening ceremonies, global sporting events, festivals, carnivals and parades. A skilled communicator, Jeanefer is an expert in collaborative working and in delivering a cohesive vision to inspire, entertain and empower. Her unique creative process and approach to large-scale multiple artform events draw together and bring to life, talents, strengths and shared stories of individuals, organisations and cultures, in inspiring and unforgettable ways.